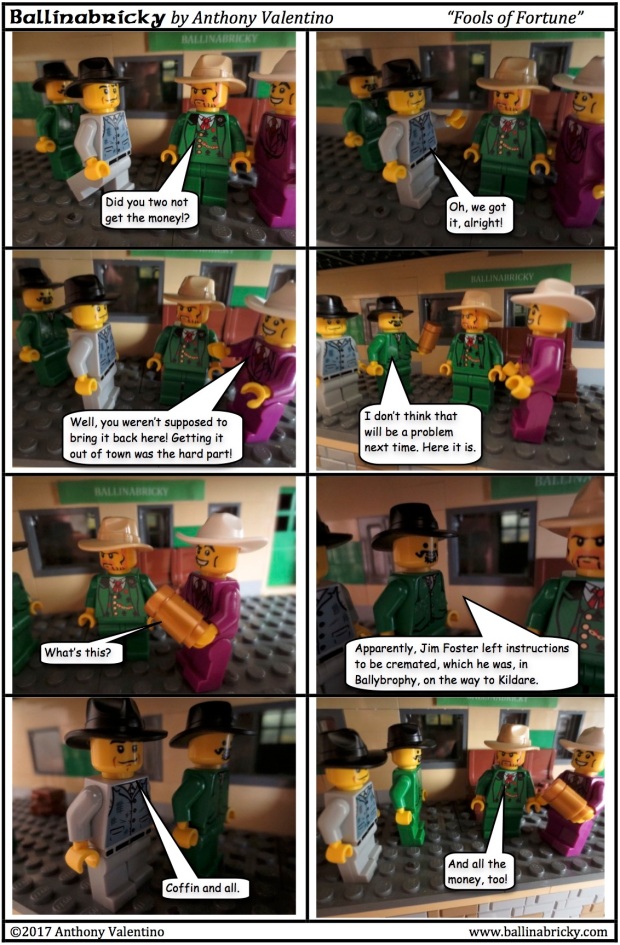 Well, at this point, if you are a classic movie buff, you may have noticed some elements of this plan and plot that seem vaguely familiar. The whole story was a bit of an homage to Ocean’s 11 (the original one).  “Donaill Muir” could be translated as “Danny Ocean,” Frank Sinatra’s character, and Jimmy Foster was the name of Peter Lawford’s character.  The idea of the multi-site heist made more likely through military training and the heart attack/money-in-the-coffin/cremation were elements inspired by the film.

And, yes, I realize the irony of having carefully constructed a realistic fictitious railway schedule but not having taken into account the two or three hours it would have taken to cremate the body in Ballybrophy, something for which the train would certainly not have waited.  That said, this gang was obviously misinformed regarding a number of details in this business, so perhaps they were wrong about the coffin being moved by train from Ballinabricky to Ballybrophy. Perhaps the Gardaí brought the coffin that morning and the funeral home sent someone by train to move the cremains to Kildare.

Yes. That seems much more likely. I’ll just say that was my intention from the start!  (Either that, or perhaps they’d mixed up some thermite in the Ballybrophy crematorium to do it in a few minutes while the train waited, but I doubt it.)

Go to the main page