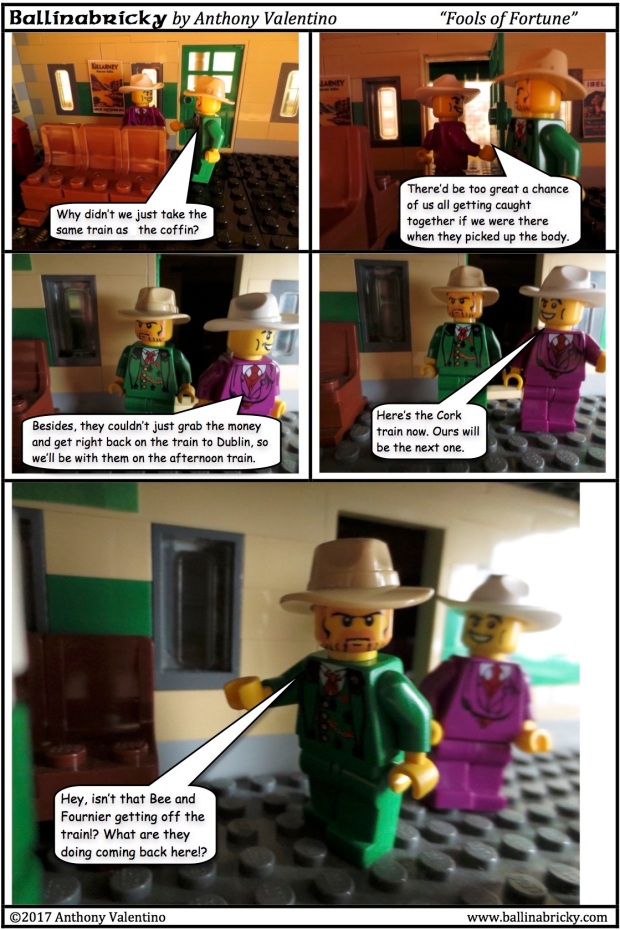 In 1936, there was a Great Southern Railways line that ran through the area where Ballinabricky is supposed to have been.  I’ve built in a spur that would service Ballinabricky station four times a day. As there’s only one track, the train would go from Cork to Dublin and back in the morning (passing through Ballinabricky once each way), and then it would repeat that route in the afternoon (passing through again). This is actually reflected in the schedule board behind Nora and Gordon at the end of The Dead.

Because of that, Bee and Fournier would have met the coffin on the morning train as it was going from Ballinabricky to Dublin.  There would presumably be some meeting with the authorities to hand over the coffin (which was expected to stay in town with Joe Foster), causing them to miss the train when it pulled out of the station headed for Dublin a few minutes later.  It seems, however, that Bee and Fournier got on the train after it turned around in Dublin and was heading back to Cork. That was not the plan, as they were supposed to stay in Kildare until the train had gone all the way back to Cork, turned around, picked up Hoyle and Tally on its way back to Dublin, and then got on it with the money (no need to actually travel with the coffin) and all met up in the city.

Go to the main page