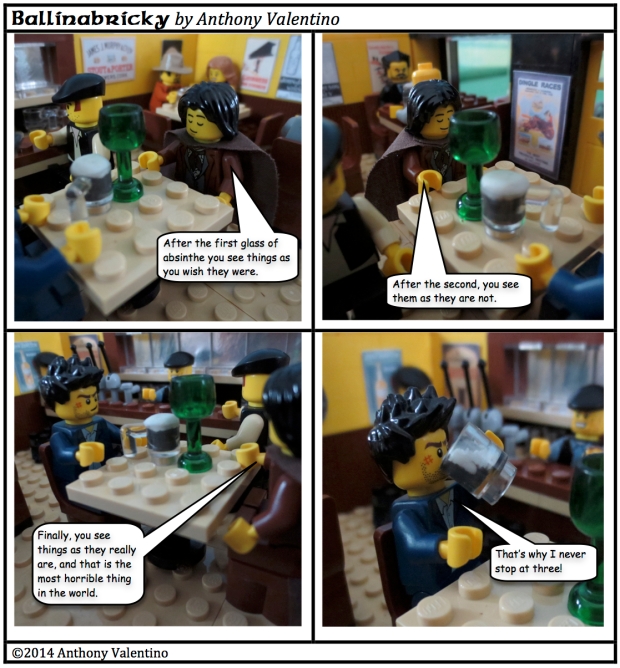 Brendan Behan was once asked by a Canadian journalist why he chose to visit the country.  He replied that back home, while in the pub, he saw an advertisement that said “Drink Canada Dry,” and he thought it sounded like a good idea.

I try not to alter bricks unless absolutely necessary, but sometimes I just have to add (or remove) something in order to really convey what I’m going for.  The pub contains many old posters and ads which I’m quite pleased came out so legibly when printed in miniscule fashion.  I’m also really pleased with the way the Guinness looks in the mugs.  I used Sculpey clay for that (unbaked, of course).

The pub was the second building I added to the town (after the largest of the thatched-roof cottages), but it was the first one to which I added LED lighting.  I always planned for it to have a second storey, but as I was still buying my bricks directly through the Lego Digital Designer at the time, the cost was prohibitive.  For several years (up through when these pictures were taken), the pub was only one storey tall.  The corner booth in the back of the first cell has been eliminated to make room for the staircase, and the three rooms upstairs will play a role in the first major story arc (starting soon…I promise!)